In this entry I illustrate my recent trip to Hollywood on a low key video shoot as a guest of Los Angeles native singer, emcee, producer, musician and party promoter Aloe Blacc.

This was my first time meeting him, but I was pleased to discover that we have plenty in common. We share our stories with you and we want your money!

Last Saturday afternoon I went to visit an old friend from back in Texas for the first time since I relocated to Long Beach. A-Op lives in Koreatown, right around Elmwood and Western. It was a good time to catch up in person and get reacquainted, plus I had an appointment in nearby Hollywood in a few.

It just so happened that my next stop was only two miles away. Left on Western, Right on Sunset… I hadn’t eaten since my breakfast – a mere bowl of Raisin Bran – so I drove a few blocks past the location to Subway for a flatbread tuna and a couple of cookies. From there I set out for the first episode of… Aloe’s Shadow! 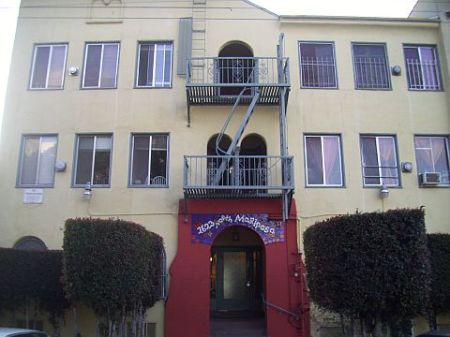 A few days earlier I learned L.A. Lesson #1 which goes, “Never let your gas tank go below half-full.” But here off of Sunset, I learned Lesson #2 which says, “Never give the authorities half a reason to write you a ticket, because they will do it!”

I thought I had a plair parking spot right out front, but that last three feet of my car that bled into the red part of the curb has now cost me $80. Red Carpet > Red Curb 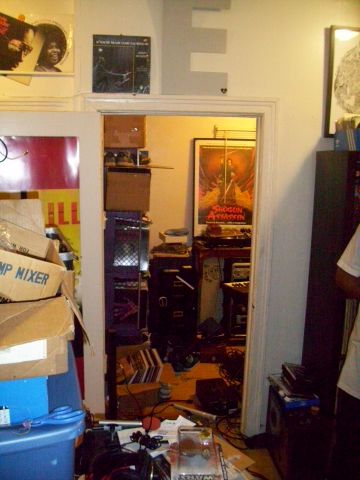 Once Aloe met me at the front door, we walked straight back to Stryke’s apartment. First, I noticed the spot was New York stuffy, I mean stuff everywhere. Second, I noticed an old blaxploitation movie, “Black Dynamite”, on the television.

Then I noticed that there were at least 10,000 records along the walls, and most of the stuff was gear. I thought to myself, “Somebody in this room is a DJ!”

The whole setup reminded me of DJ’s like Good Grief in Houston or Baby G in Austin. In fact, when I mentioned Baby G to Stryke that evening, he got quite excited.

Cornbread from Kali Wild, a group whose original members include producer/mc Oh No, is the man of the hour.

[I’m sure some of you have never heard of Oh No, but just know that he, his brother Madlib and Aloe Blacc are producers/artists on the indie powerhouse Stones Throw label. For some reason, the name Stones Throw has come up 10 or so times since I moved to the West.]

We all got together at Stryke’s house to work on the video for Cornbread’s “Relaxin’” feat. Aloe Blacc and Maya Jupiter, produced by elevatedSOUL from nearby West Covina, CA.

Well, frankly, that’s the reason THEY all got together. I was there because Aloe thought it would be a good place to formally meet, and was kind enough to let me tag along. Shortly after my arrival, while BZ was setting up to shoot something in Stryke’s doorway, Aloe made a great point. We needed to get upstairs and do the rooftop shots while the sun was still out.

This was the first thing I saw in the distance from the rooftop. I thought it was some kind of mosque, but my wife straightened me out. Thanks, Tif.

Once Stryke pulled out his phone and started shooting flicks, I felt more comfortable shooting my pics and video. I immediately started making myself at home.

As a teenager in the mid-90s Stryke made North Long Beach his home, off of Linden near Jordan High School, just East of where the 710 intersects the 91. It’s all the way up by Compton, basically the polar opposite of where my Belmont Heights apartment is in Southeast LBC.

Stryke also spun on Divine Forces Radio for about 10 years on KPFK 90.7 FM. Like most DJ’s, Stryke is also a producer, and wants Cornbread to come record as soon as possible. One of Cornbread’s kids is rapping now, so maybe he can bring them too.

This is BZ, the producer and director of Cornbread’s latest videos, and Maya Jupiter, who is a guest emcee on the song as well as Aloe’s lady. Maya is a Mexican-born, Australian-raised broadcaster and artist known to have a heavy world/indigenous influence on her sound and style.

She left Australia with hopes of new experiences and opportunities, as well as fresh artistic collaborations. She said that she and Aloe are in the stage of life where they have opportunities to “make some things happen”, yet they’re conscious of the time to settle down and start a family coming soon.

When someone asked her when she’d leave L.A., her answer was when she doesn’t feel like being here anymore.

Aloe Blacc is the first L.A. local to extend his hand to me. The first weekend that I decided to step out on the scene, I went to the Rhythm Lounge in downtown Long Beach. I didn’t enjoy it. In fact, something told me to go to Garth Trinidad’s event in Silverlake the next night. But thankfully my boy Vincent went, and ran into Aloe.

I especially appreciate Aloe’s generosity because he’s doing pretty well out here. His second album on Stones Throw is slated for a Spring or Summer release, and one of the tunes on that project called “I Need A Dollar” is the theme song for HBO’s new original series “How to Make It In America”.

Aloe is also one of the presenters of the Do Over, a summer party series (and now a corresponding record label) that many people have mentioned to me as the place to be. So I don’t mind being Aloe’s Shadow. In fact, I’m grateful for him and others who can show me the ropes in this stage of crossing my t’s and dotting my i’s in Los Angeles.

[Everybody on the Roof]

Cornbread wanted everybody on the roof for a crew shot, even Aloe’s Shadow hahaa… When I knew BZ wasn’t shooting in my direction, I captured this shot of Aloe lip-synching. Cornbread, Aloe and Maya all spit verses on “Relaxin’” and Aloe sings the hook as well. This song is as laid back as the day is long, and the sun was beginning to set. The sun sets in the West. Maybe that’s why the street is called Sunset?

Good conversations always happen in these situations. The longer I hung out with these folks, the more familiar everything seemed. This was not a Benny Boom-level shoot, and I’ve been on more of these than the ones that cost $7,000 out of pocket on a major hookup. 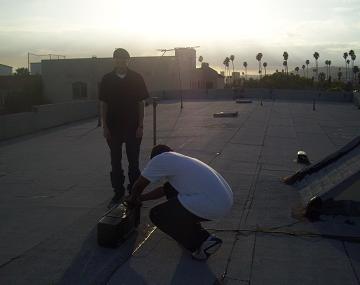 As the sun continued to lower itself into the Pacific horizon, BZ packed up the jam box and went down a level or two to catch another shot.

After a good take, BZ and Maya wait for Aloe to rewind the CD to the top of Maya’s verse.

After sundown, we went back to where we started – Stryke’s living room. Sista Asia proudly displays Cornbread’s “Character” 12-inch produced by Oh No. Cornbread said he’s working with Sista Asia to possibly drop this next LP entitled “The Big Wakeup” through a French label. 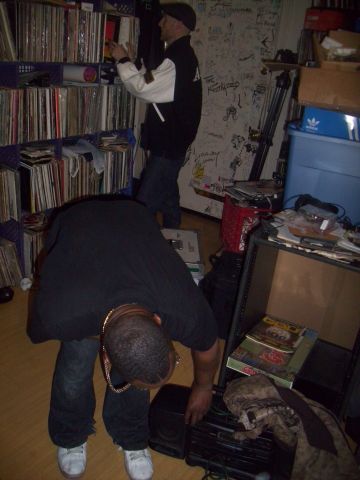 Cornbread is now on jam-box-playback duty as Stryke pulls records that just so happen to get name-checked in the song. 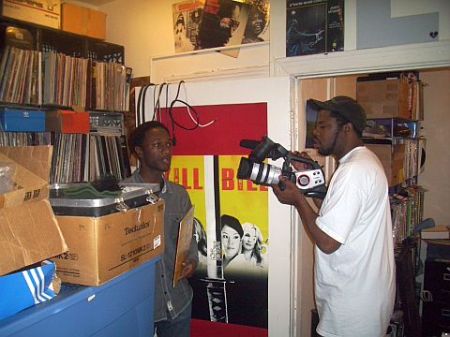 Aloe was shooting one of the final scenes of the day here. He had some trouble remembering his raps, but it actually turned out for the best. You’ll see what I mean in the actual video. He and Cornbread have known each other for nearly a decade, and the camaraderie was obvious.

Aloe is one of Maya’s album producers, and they’d like to have kids pretty soon – especially if the music pays well.

Music definitely pays when your song plays in every episode of a hit HBO show. Aloe said he’s interested in writing television shows, for starters.

“It’s all storytelling,” he said. “I do it in my music and eventually I’d like to do some acting, and get behind the camera.”

All in all this was a day that was parallel to my perspective more than it was anything new.

Record Man. Broadcaster. Artist. Writer. DJ. Producer. Hip Hop. Soul. It seemed to me that most of their interests and experiences, plus the overall family vibe were, well… familiar.

Eventually I noticed current actors like Michael Jai White and Tommy Davidson were playing in that movie on the television. So this “Black Dynamite” wasn’t an old movie at all, but a new movie I would’ve thought had been around my whole lifetime. Not unlike the characters on this video shoot.