Today we’re talmbot “Fire In the Firmament”, the song.

Not sleeping giant producer, singer and songwriter Dertrick “Fire” Winn. Not Dylan Dylan Dylan who, by the way, spits hot fiyah! Not Grammy nominated gospel rapper Flame. And last but not least… not Atlanta rapper and shooting victim (and son of the lady who manages Gucci, and OJ) Wocka Flocka Flame. Oh, let’s do it! 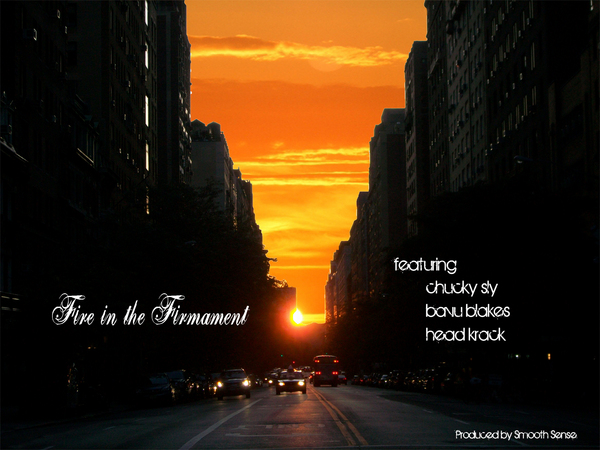 “Fire in the Firmament” is a joint I’ll share with you awfully soon. This particular Fire was envisioned by Dallas-area producer Smooth Sense and features three kings: Chucky Sly, HeadKrack and I.

I believe it to be divinely inspired. My wife says it sounds like a Jazz Liberators song. In the hands of God and/or an alchemist, a lil’ flame can make gold.

From the beginning, make an entrance while you’re at your purest / Until you’re living off your interest in your endurance

It sure is established, your habits and your soul are one / This is your currency, flip it or you could fold it up

Try to smile and consider every mile you made miraculously / It didn’t have to happen, we were saved

I want my children feeling free to play, we can pave a golden road so they can boldly roam before we see the grave